Lithium ion secondary batteries hold tremendous promise for use in vehicular applications and load-leveling grid applications, due to their very high energy density. However, current technology is limited in charging rate, power density, reliability, and safety. Many of these issues are related to the formation and evolution of the solid-electrolyte interphase (SEI) layer between the anode and electrolyte, as a product of electrochemical decomposition. Long-term reliability is affected, as the flow of Li ions into and out of the anode is hindered during charge cycling, and the electrical characteristics of the battery degrade as the SEI layer forms. However, the passivating property of the SEI layer is critical for performance, since it helps prevent further decomposition of the electrolyte at the anode interface. In practice, a thin, stable SEI layer with high Li ion conductivity and low electrical conductivity is desired. Any dynamic and inhomogeneous build-up or modification of the SEI film during operation must be avoided. We are undertaking a large-scale ab initio molecular dynamics (AIMD) study of the interface chemical reactivity leading to SEI formation and evolution in order to gain a detailed understanding of the relevant chemistry and dynamics, and so enable design of optimal electrolyte/anode systems. In order to make possible the required very large scale simulations, we are developing a new discontinuous Galerkin (DG) pole expansion (PEXSI) based electronic structure method for the efficient, parallel solution of the Kohn-Sham equations of density functional theory for systems of 10,000 atoms or more. 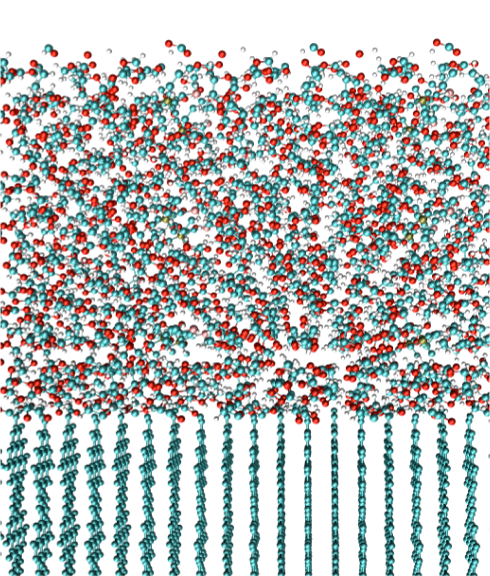 Figure: Snapshot from molecular dynamics simulation of a mixture of ethylene carbonate and propylene carbonate (EC/PC) electrolyte on a graphite substrate. 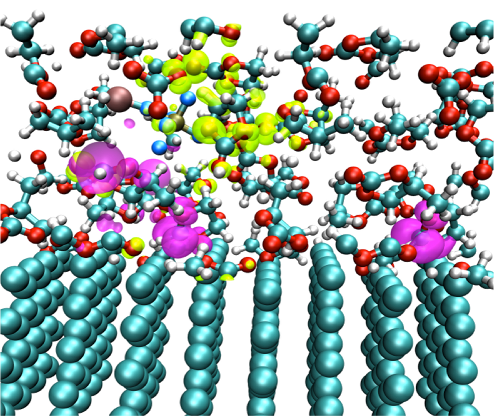 Figure: Close-up of simulation snapshot of EC/PC on graphite, showing frontier orbitals related to electrolyte decomposition on the surface.

Funding from the DOE SciDAC-3 program through ASCR and BES is acknowledged.